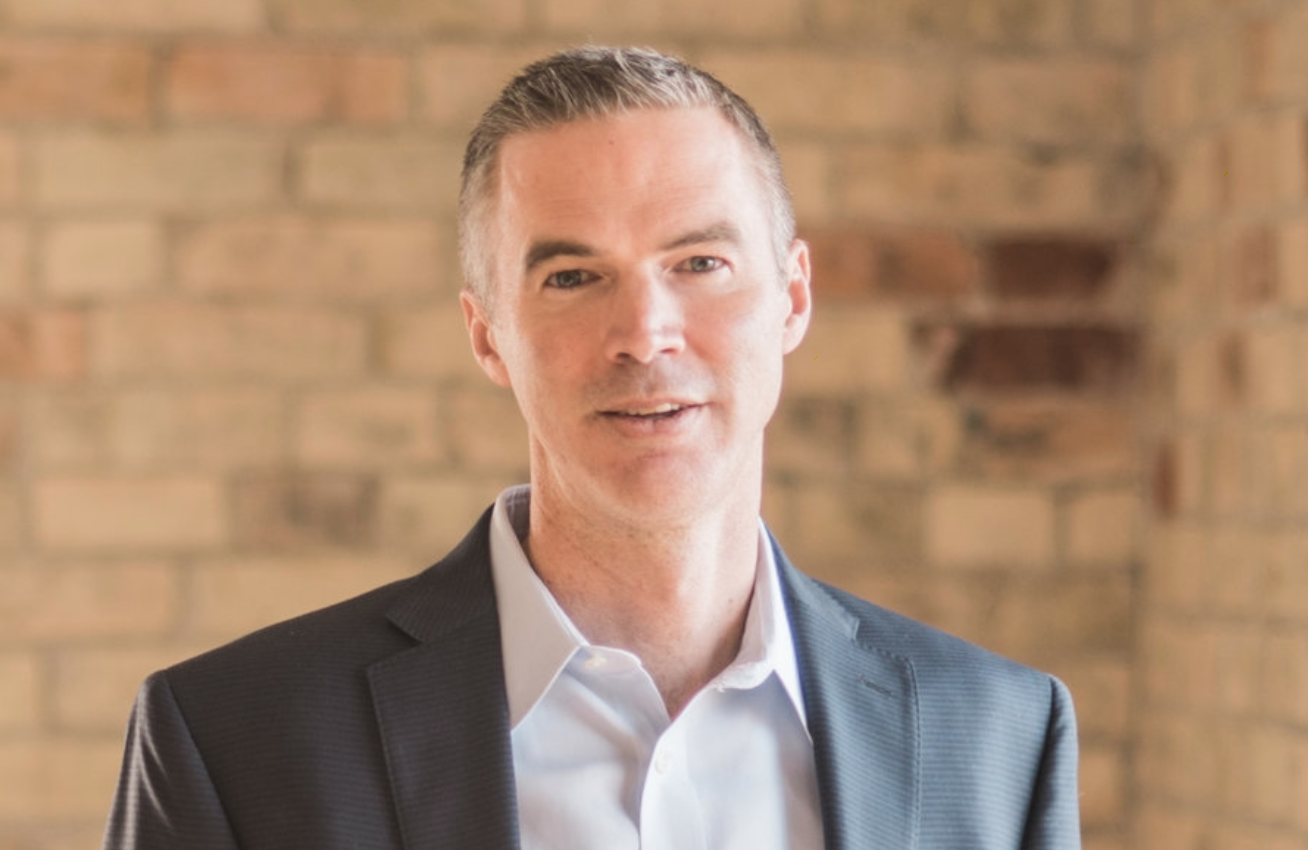 Eric Eliason is the United Utah Party congressional candidate who will participate in District 1's debate.

Once again, the United Utah Party has broken through the two party system monopoly.  The party has fielded a federal candidate who will participate in the Utah Debate Commission debate.  Eric Eliason, the party's First District candidate, has been invited to debate Rob Bishop on October 17 in Logan.  Last year, Jim Bennett debated John Curtis and Kathie Allen in the Third District Special Election debate. 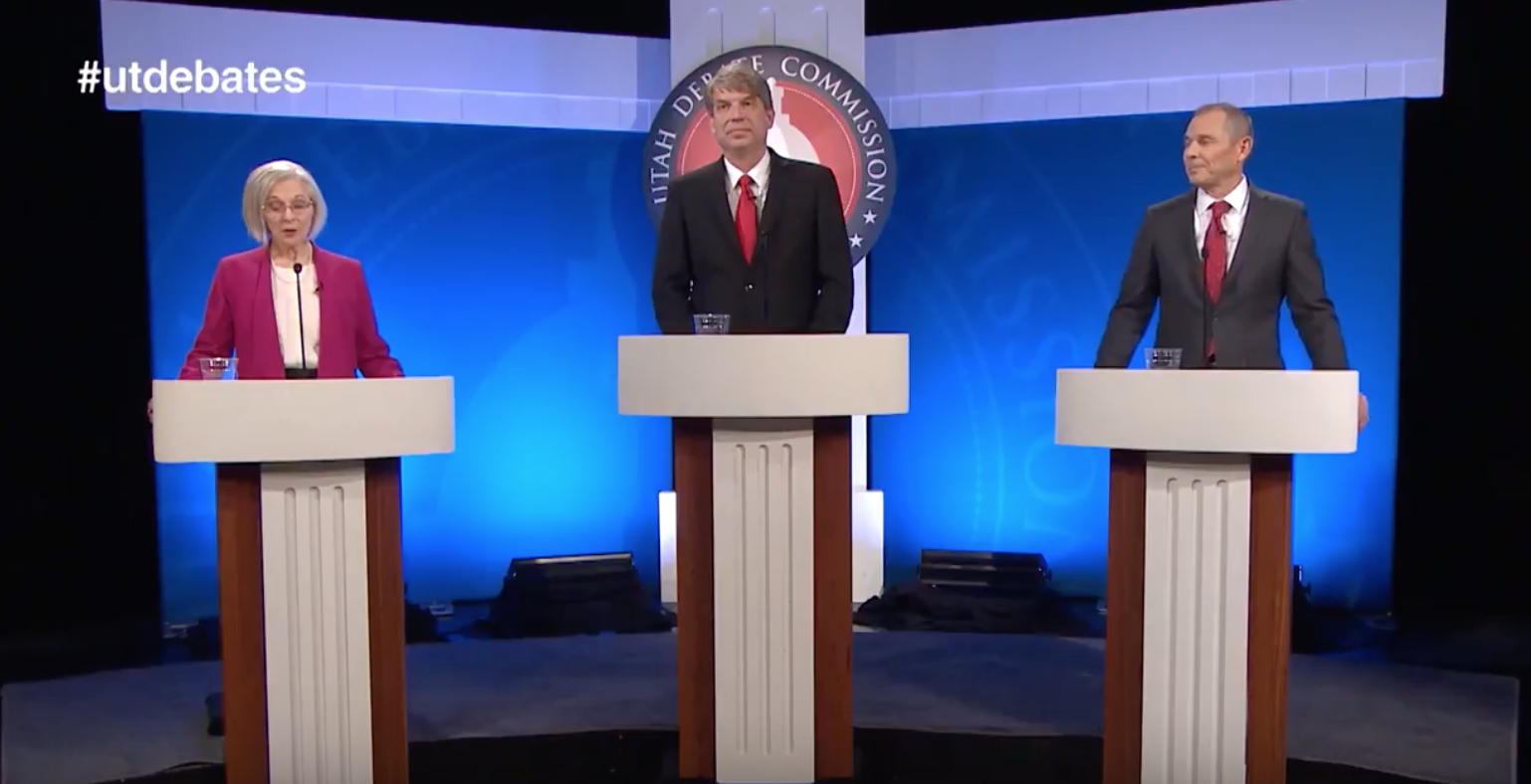 This opportunity shows that the United Utah Party is not another minor party.  The actual minor parties - Libertarians, Constitution, Independent American, Greens - have struggled to get invitations to participate.  They have not been able to cross the threshold of public support in the past or this year.

The United Utah Party, however, has done it twice in two years.

What will come of this invitation?  Eric will be able to introduce himself to the hundreds of thousands of Utah voters who watch the debates across the state.  They will see that the party is fielding candidates who are a breath of fresh air for voters.  Eric is the kind of candidate who can break through the stagnation and gridlock with new ideas and without the baggage of partisan extremism that characterizes the Democratic and Republican Parties today.

Help us help Eric capitalize on this opportunity.  Go to unitedutah.org/donateand help Eric get elected.

Nils and Emily Bergeson were happy living and traveling abroad over 10 years through foreign service opportunities, first as volunteers for the Peace Corps and later through Nils’ job as a foreign service officer for the United States Agency for International Development (USAID). They had lived in Romania, Colombia, Kazakhstan, Afghanistan (Nils served this tour alone), and were living in Indonesia when they felt the call to return home. Having overseen efforts to improve democracy, equality, and transparency abroad, it seemed like the United States could now use a little help in those same areas.

Nils had already cultivated a love for travel through a study abroad opportunity to Germany and while on an LDS mission to Russia. Emily had her sights on Peace Corps service after working for a humanitarian organization in Mexico shortly after graduating from the Marriott School of Business at Brigham Young University.

The couple met at an LDS singles ward in Washington, DC where Emily – who is fluent in American Sign Language (ASL) – worked as an ASL interpreter for a number of government agencies as well as several universities in the DC area. Nils was in the nation’s Capital too, looking to start a career in international relations. Nils decided to go to the Monterey Institute for International Studies (MIIS) and the two maintained a long distance relationship until they were married a year later.

Nils and Emily both play essential leadership roles in the United Utah Party. He’s the Executive Director while she's the Webmaster. Emily also does double duty as the party’s vice chair for Cache County. The couple’s commitment to the higher cause of countering political extremism in Utah runs deep. “I want to help ensure that people … have an option for leadership that reflects who they are,” said Nils. Emily shares her husband’s enthusiasm but acknowledges that getting people to commit to being active in the party isn’t without its challenges. “It’s hard to know how to unite people without some kind of rage or negative emotion,” she said. “But I believe that inspiring people by giving them a vision of what is possible is a better way.”

Emily’s devotion to civic duty is truly inspiring given that she was diagnosed with breast cancer in January and has had several surgeries since then. All this, while she and Nils raise three young children – Jane (8), Harry (6) and Rosy (2). 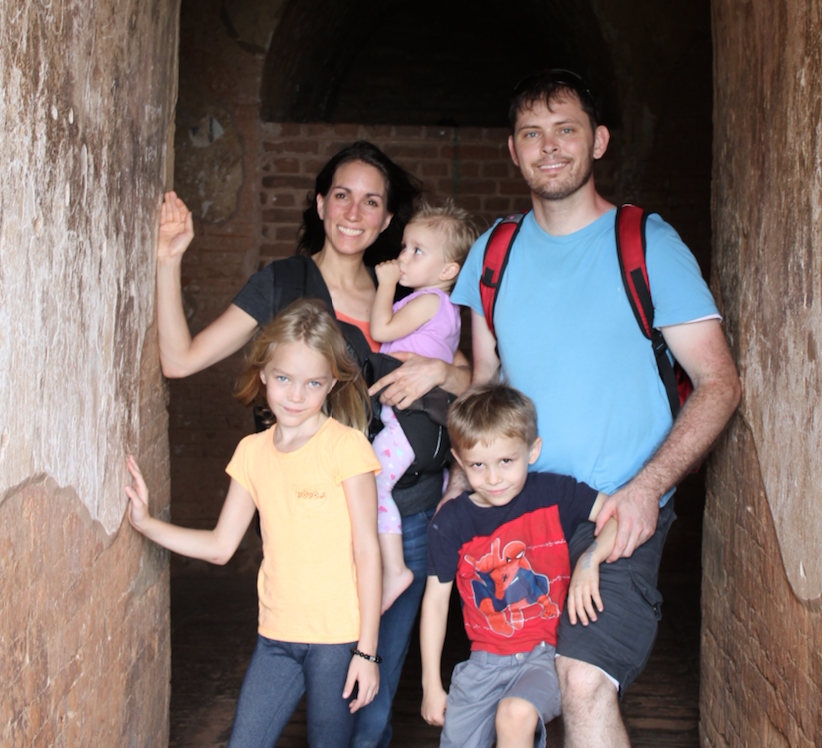 Nils and Emily somehow find time to pursue interests outside of the party. Nils is a published children’s novelist, having released one fictional work, The Magnificent Glass Globe, for readers ages nine through 13. He’s currently working with his publisher on the sequel. Emily writes a popular blog entitled “Mom Talks Politics” where she helps women who are not normally involved in politics to become more comfortable and aware of the issues.

Emily sums up why the Bergesons are so committed to making the United Utah Party succeed: “I believe talented people need to be willing to make the necessary sacrifices to contribute to a better future.  If not us, who?”

If anyone knows about sacrifices, the Bergesons do. The United Utah Party’s vision and growing influence in Utah is due in no small part to their example. If everyone were to demonstrate such energy, optimism and commitment, the history of politics in Utah would, indeed, be a much different story than it is today.

Larry Alan Brown is the author of Choosing the “Right”: The Rise and Repercussions of Republican Politics in the LDS Church. His website is www.larryalanbrown.com. Come join us for our Family Fundraising Social at Lindon City Park on Saturday, September 29th from 4:30-7:30pm. There will be ice cream, games, and the chance to meet your candidates running for office. Mark your calendars today! More details coming soon... The United Utah Party is holding a Housing Affordability Summit. 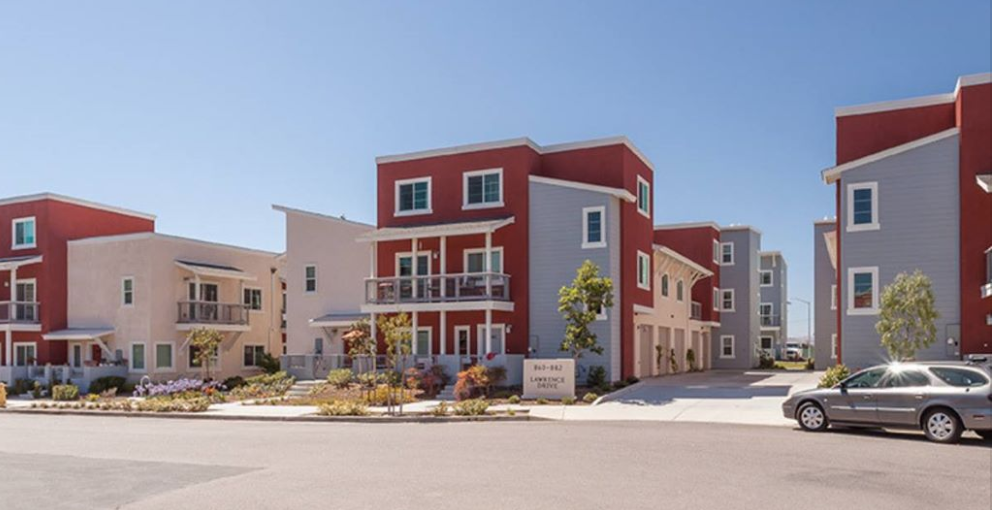 "Many people think of 'housing affordability' as a problem faced by the homeless and indigent; however, it is clearly becoming a challenge for many young families and seniors on fixed incomes,” said Deon Turley, the United Utah Party Secretary who planned the event. "It will affect more and more people, if trends continue.” 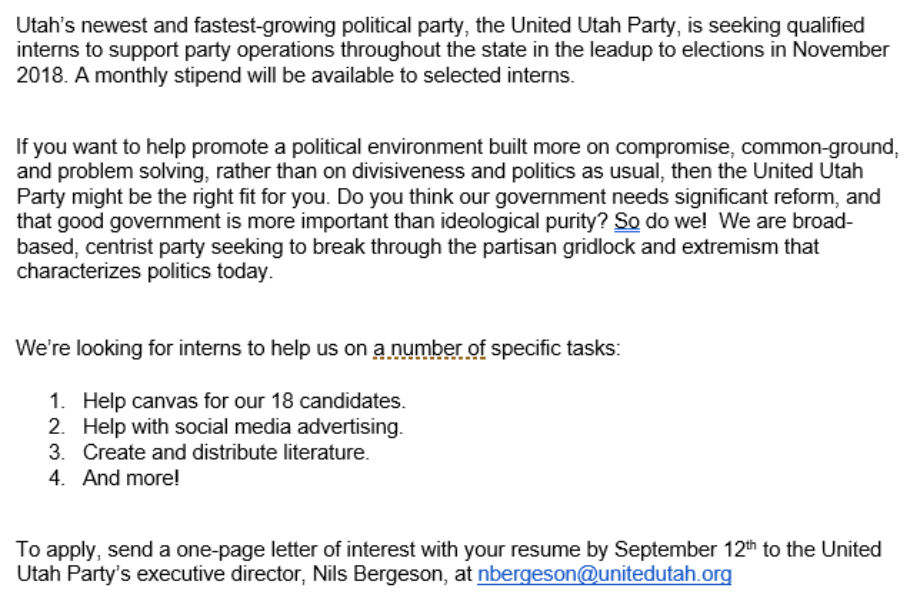 We're set to have a booth at the State Fair, starting a week from today!

Although many have added their names, we are still in great need of people willing to take a shift at the fair. See the chart below to see where we still need volunteers the most!

To sign up for a shift, click here.  Don't let the chickens and casseroles steal the show! 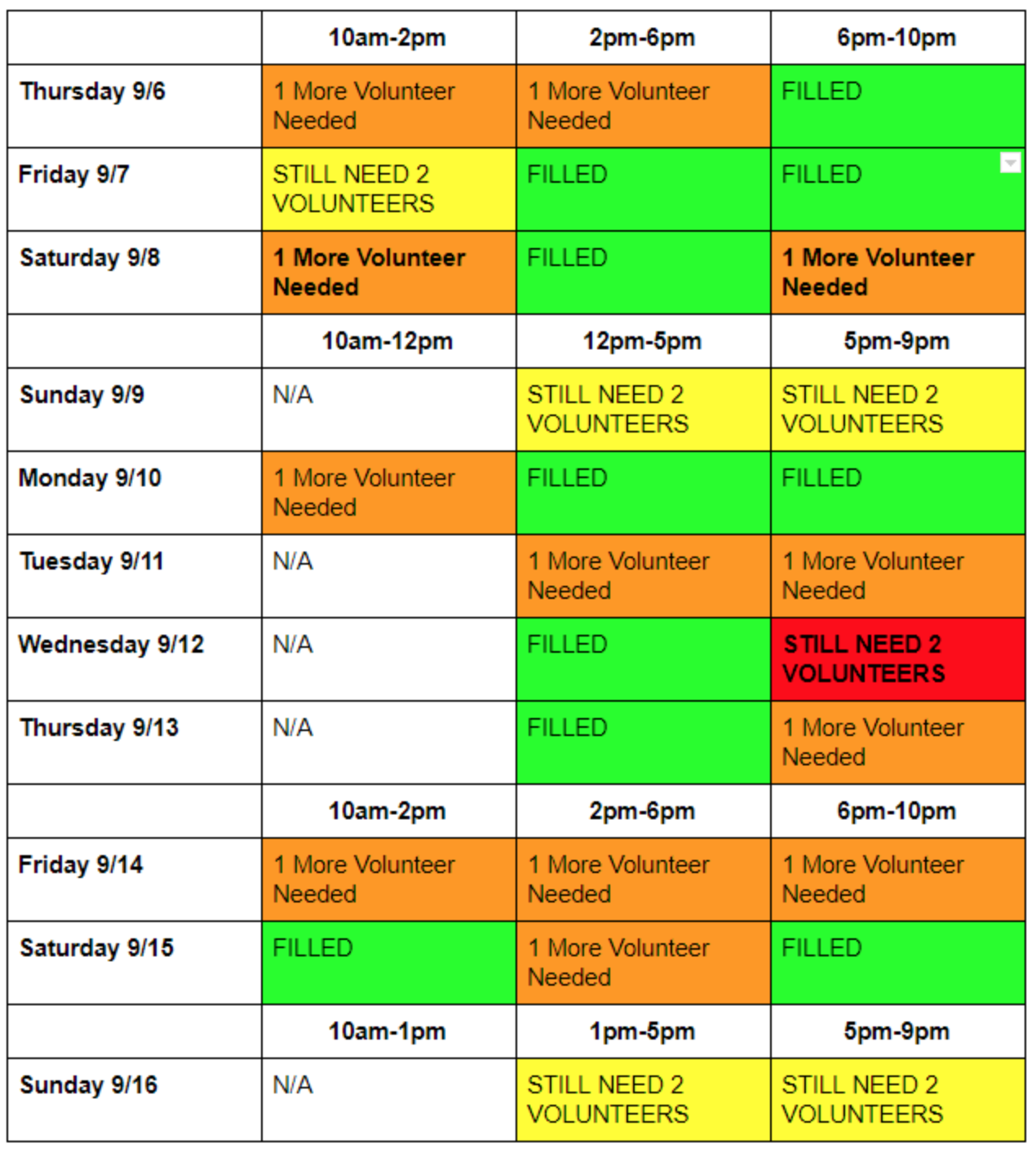 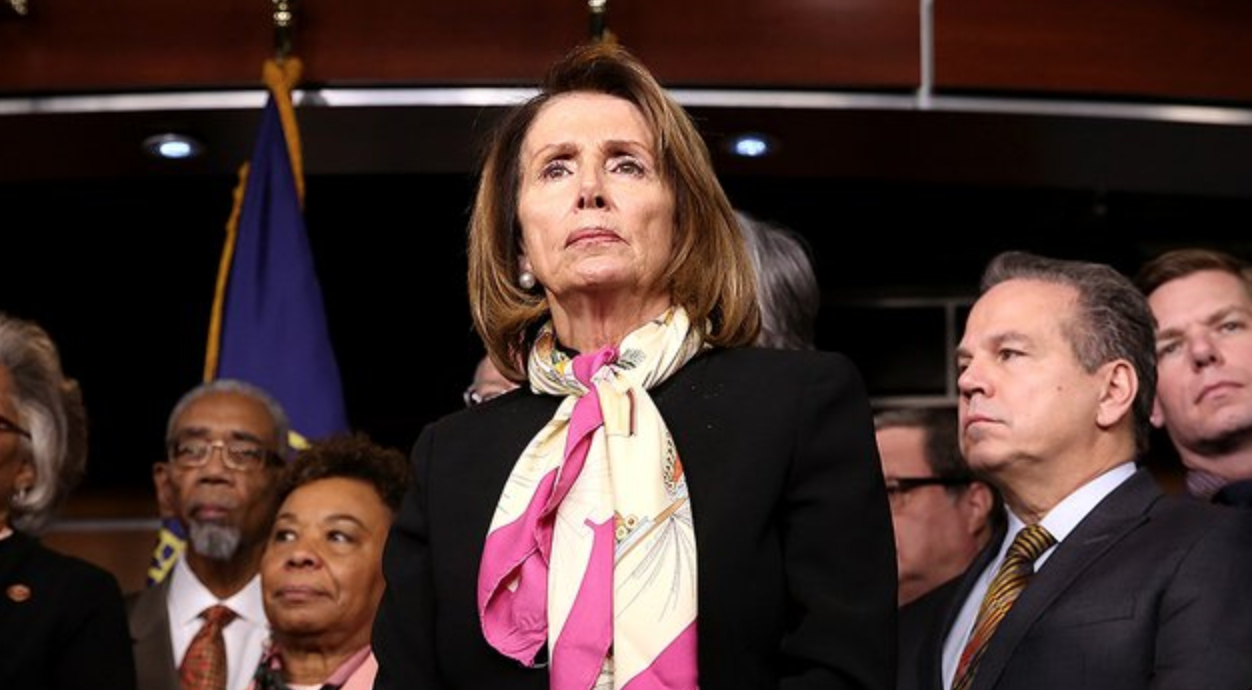 Photo from The Hill

"Should they take back the House in November, Democrats are vowing not only a shift in legislative priorities and much stronger White House oversight, but also rules changes on how the chamber is run.

"House GOP leaders this year hit a dubious milestone when they broke the single-cycle record for reporting closed rules — the procedural step barring lawmakers from amending bills when they hit the floor.

"In the eyes of Democrats, and a growing number of Republicans, the distinction highlights a disturbing creep toward top-down legislating that’s stifled debate, paralyzed rank-and-file members and thwarted the 'more inclusive' process Speaker Paul Ryan (R-Wis.) promised when he took the gavel three years ago."

"Members of the bipartisan Problem Solvers Caucus are ahead of the curve, proposing a slate of 10 rules changes that’s getting a good deal of attention from leaders of both parties. Central to their reforms is a proposal requiring a supermajority vote — three-fifths of the House — to pass any legislation brought to the floor under a closed rule, and another ensuring fast-track consideration of any bill co-sponsored by at least two-thirds of the chamber. 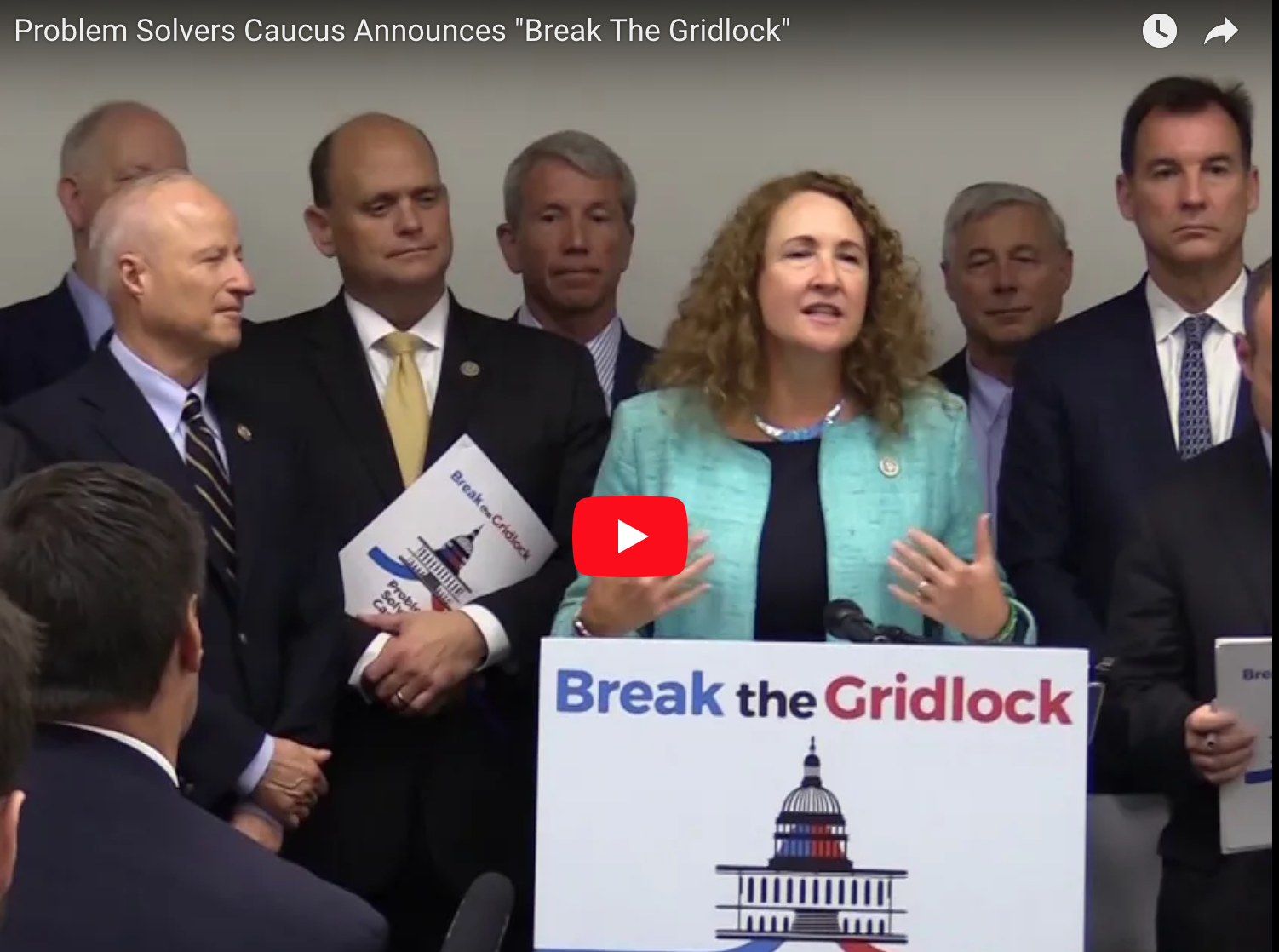 "A third recommendation from the Problem Solvers Caucus — a group of 48 lawmakers, split evenly between the parties — would raise the bar for ousting a sitting Speaker by requiring one-third of the House to publicly support such a motion. Supporters say that change would prevent a small group of detractors from using threats to “vacate the chair” as a bludgeon to keep certain bills — even popular bipartisan ones — from being considered, as the far-right House Freedom Caucus has done under both Ryan and his predecessor, John Boehner (R-Ohio).

“'It allows a small faction to hold the Speaker hostage,' Rep. Josh Gottheimer (D-N.J.), one of two co-chairmen of the Problem Solvers group, told The Hill. 'It just leads to mass dysfunction.' 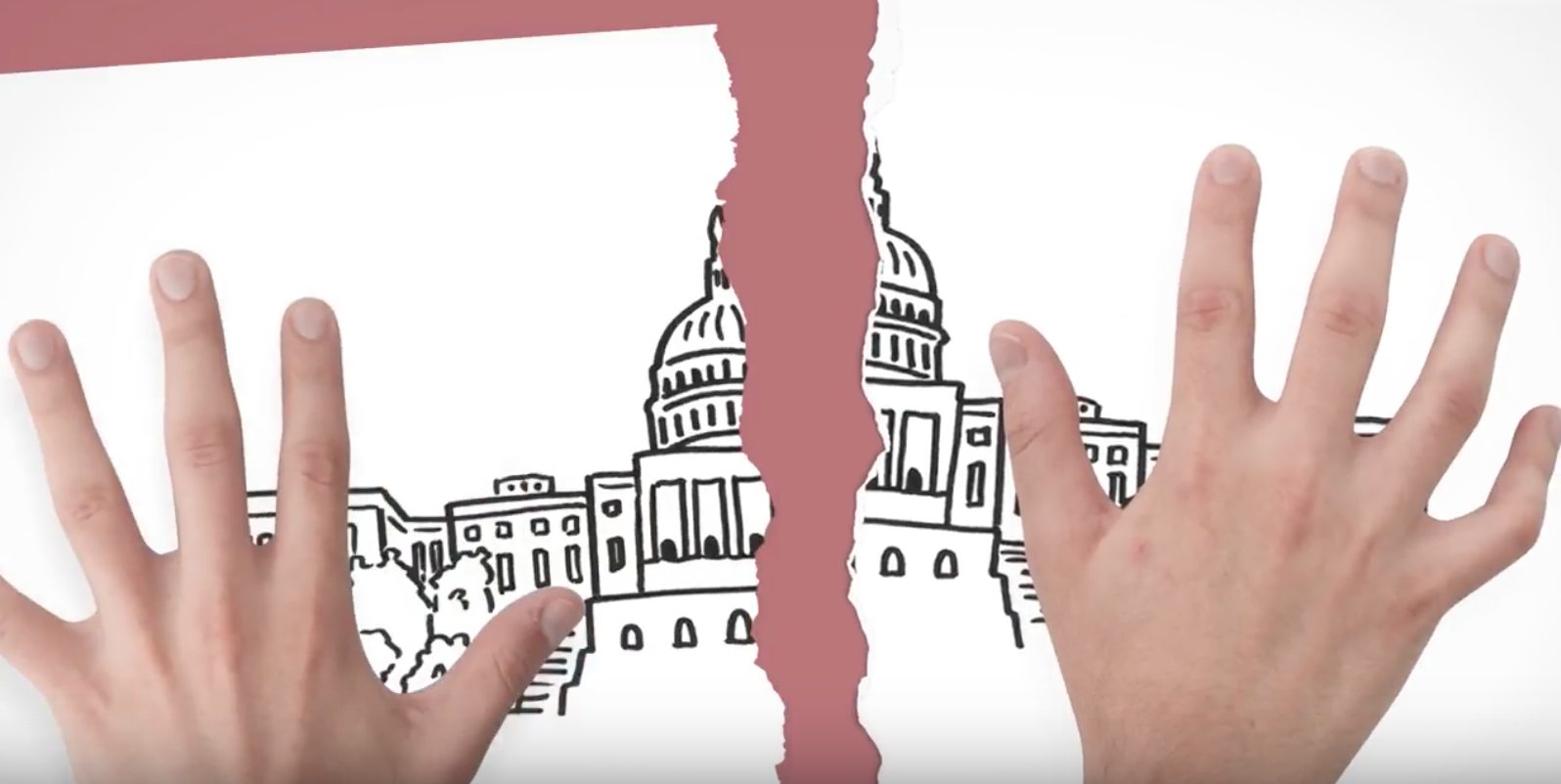 "Outside groups are lending some heft to the effort. No Labels, a bipartisan government reform organization, has launched “The Speakers Project,” which aims to break the partisan logjam by changing House rules to require, among other things, that the incoming Speaker receive bipartisan support in order to win the gavel — an unheard of dynamic in modern times. The rules vote next January, the group argues, 'presents a remarkable opportunity for a handful of reform-minded members to jolt the sclerotic House out of its torpor.'”

To read the full article from The Hill, click here.