Why Join the United Utah Party?

Standing united, we can do anything.

Join now or explore why some Utahns choose to stand with the United Utah Party:

The current political landscape is undeniably polarized, to the point that each side of the aisle believes the other side is their enemy. This is unacceptable. We are citizens of Utah and citizens of America, and we all have the same goal—to leave America better than we found it. We need to catch sight of this goal as Utahns and Americans if we are to persevere and progress as a country. While I agree with many facets of the party platform, the deeper drive that is pushing me to join the United Utah Party is the belief that this party is the best vehicle to restore civility, compromise, and conscience into the political discourse.

After several decades of residence in Utah, I've learned the sad truth that moderate persons have almost no opportunity to effect any change in either of the major parties. I've been a member of both and worked hard to make a difference to no avail.  I feel like UUP, the centrist party, gives us a "fresh start"--and opportunity for moderates to come together with others of like minds. Together we can elect candidates who reflect the values of more Utahns than either of the two major parties.  For candidates/representatives who are beholden to no one except their constituents, UUP is unique in Utah's political scene. See the UUP platform here. Consider joining with us to MAKE A DIFFERENCE!

I am really worried about how dysfunctional our political system has become. The current system encourages those who are the most angry and the least willing to compromise. People with more centrist views, who are actually the majority of voters, get drowned out. And since those holding office can’t compromise or don’t want to, we end up with the majority party trying to force through their ideas without involving the other party, and those in the minority party just trying to play obstructionists. This is no way to come up with long-term, good solutions to problems, or to encourage more citizens to get involved with the political process. I have joined the United Utah Party because centrist voters need a voice and because we need elected officials who will put the needs of the people ahead of the needs of the party.

I joined the UUP to promote the ideas of life, liberty, and justice for all. We need to work harder to protect the rule of law, and promote religious freedom. I want to support healthy public dialogue, and to find good and honest leaders who share these American ideals.  The two major parties have failed us, in D.C. and in Utah. Both have been hijacked by extreme and hyper-partisan movements, their mainstream leaders bowing to divisive populist rhetoric. Good governance should not be about finding the Republican solution or the Democrat solution. Its about finding the solutions that work.  The UUP is not just a centrist party. It does not fit neatly into the Right-Left spectrum - which is the point. It is moderate more in its approach than in its ideology. The rule of law, good governance, and moral leadership are not partisan issues.

My frustrations with education have been because of  things that have happened at the legislature. Because of legislative decisions that I felt were party driven and not what was best for students, and after years of being on the wrong side of my party education platforms I had to leave.

The first example of my frustration with our state’s party politics was the 2007 School Voucher Law. Our state legislature decided that our state was in need of a Private School Voucher program. The gist of the law was that students new to private schools would get $500 to $3000 based on family income. This law passed in a state where Jeanetta Williams, president of Utah NAACP, stated that 96% of Utah students attended public school. My mind still can not get around taking money out of a system that is taking care of so many of our children.

So how could a law like this make it through our 45 day legislative season. I believe that it did because at the time a national party was pushing that as a major agenda item to its education platform. National leaders wanted it to pass in Utah to make an example out of us. It wasn’t driven by the families of Utah. The proof for that became clear as several groups went to work to gather signatures so the state could vote on it. 62% of Utahans rejected the legislative voucher law. Utah deserves legislators that puts Utah first, not national platform issues.

The second example of my frustration was how a really good idea was undone by party politics this past legislative session. Gail Miller and a group called “Our Schools Now” proposed a ballot initiative to raise the state income tax rate to fund education. The original idea was to increase the 5 percent income tax rate by seven-eights of a percent. It was projected to have raised $750 million annually for public schools, colleges, and universities.

A certain party fearing that the idea was getting too much foothold got involved and changed the tax to a gas tax. I believe the initiative was voted down not because Utah didn’t want to support education, but because its proposed gas tax was a bad way of funding education in a state that is so in need of a gas tax to support its roads. In state that has so much federal land and no lottery, we are going to have to be creative in raising and spending funds for education. I applaud Gail Miller and “Our Schools Now” initiative.

My hope is that Utahans will continue to find solutions to will work for Utah. My belief is that there is more that can unite us. We can not let national parties stop us from doing the right thing for Utah. 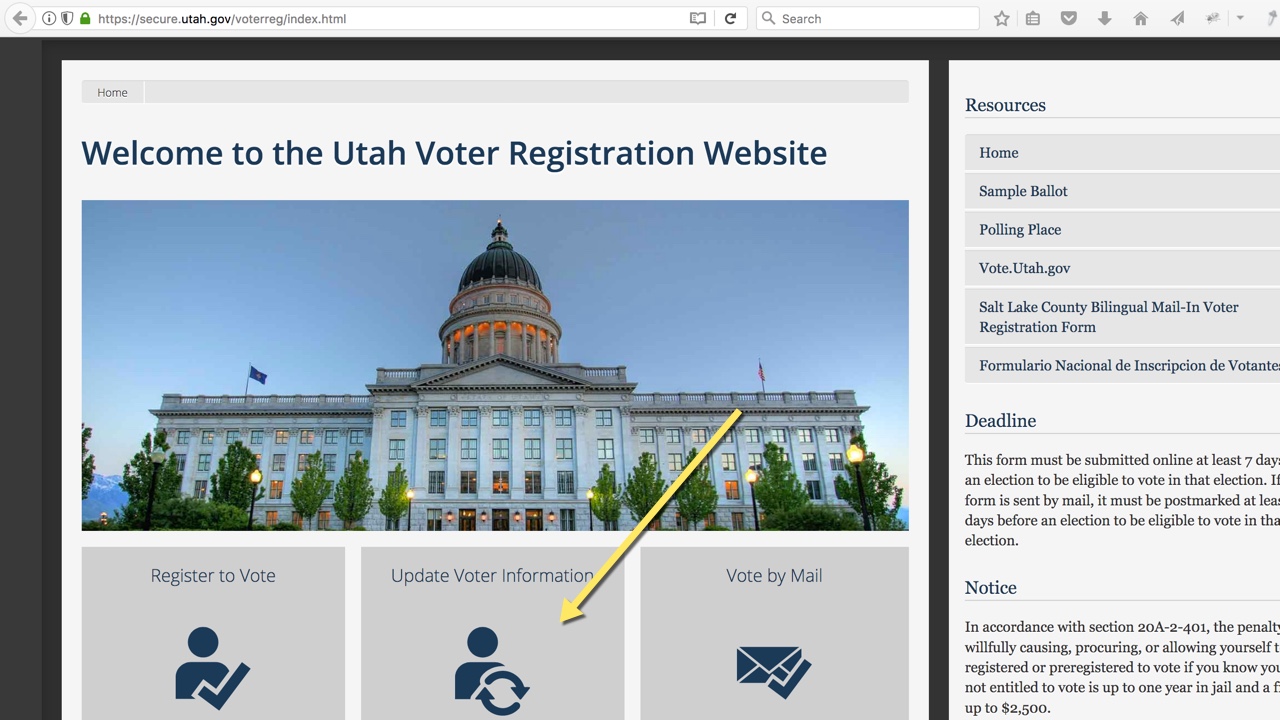 2. Enter the required information and then click "Continue". Note that your house number is not your full street address, it's just the house number. 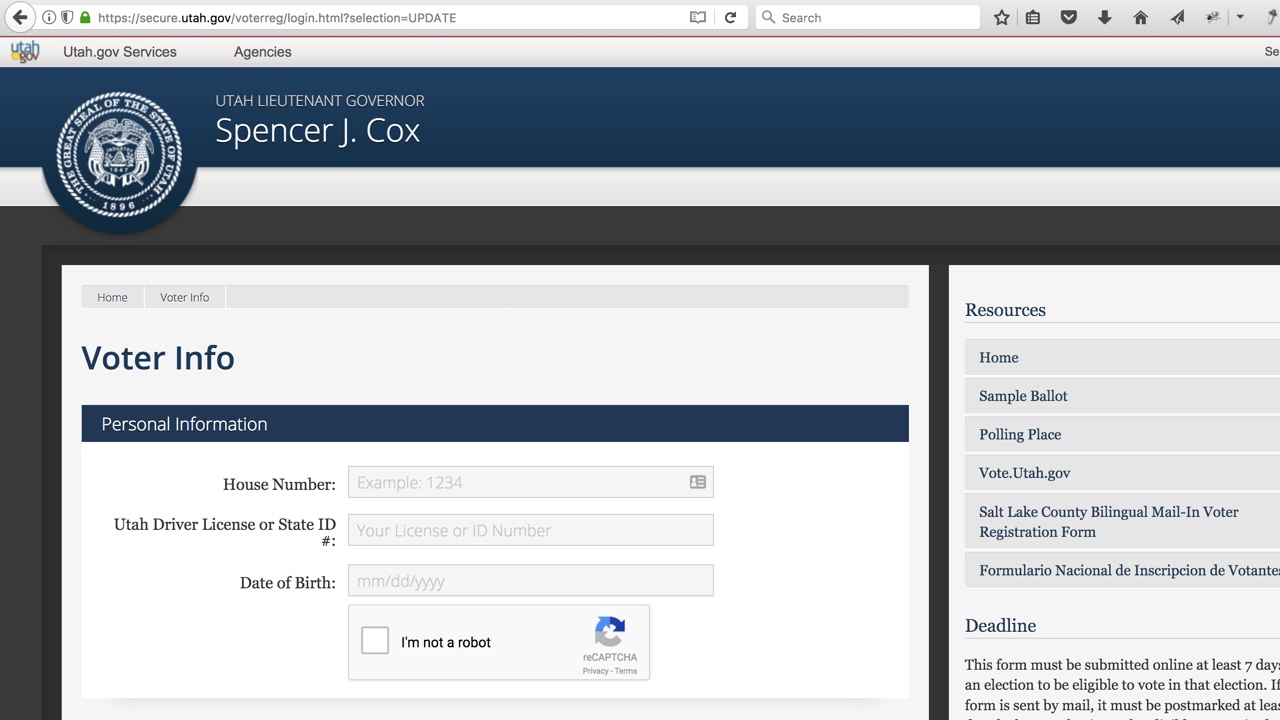 3. Confirm all existing information as you scroll down to the "Political Party" section. Select "United Utah Party" from the drop-down menu. 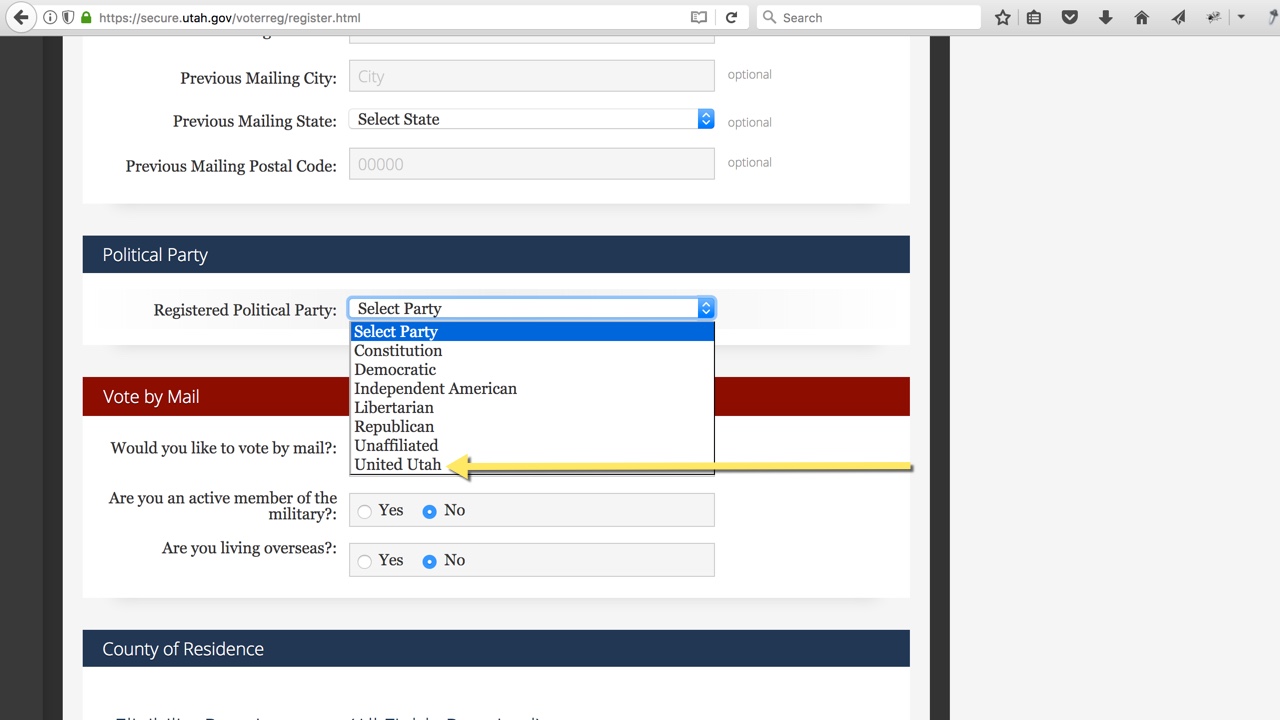 Scroll the rest of the way to the bottom of the page and click "Save and Continue".

Now you're an official member of the United Utah party!