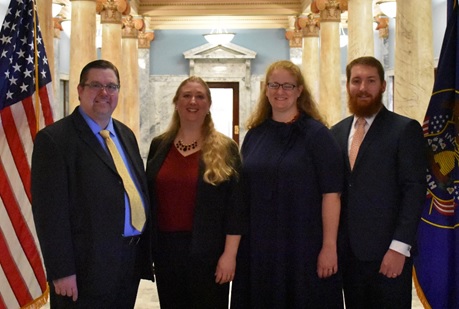 Said United Utah Party Chair Richard Davis,“We are delighted to present the first group of state legislative and local candidates to run on the UUP banner. Each one brings a fresh approach to government. They are young and new to politics and will offer a stark contrast to politicians. We hope voters will learn more about them and the United Utah Party they represent.”

The candidates who announced for the 2018 election include:

Isaac Walters, running for House District 56, is a Lehi resident and earned a BA in Theater from BYU, a MFA in Directing from Columbia University, and an MBA from the University of Wisconsin. Mr. Walters has spent a majority of his career in higher education and currently works at UVU.

Hillary Stirling, candidate for House District 57, is a Pleasant Grove resident and received a BA in English from BYU and an AS in Paralegal Studies from UVU. She is currently employed with the law firm Mack and Associates.

Teri McCabe is our candidate for Utah County Commissioner Seat A.  Teri, a Provo city native, has a Master’s and Bachelor’s degrees in Athletic Training from Brigham Young University specializing in Performing Arts Medicine. Teri is an active member of her community and currently serves as the Provo City Franklin Neighborhood Chair, is a member of Provo City Library Board, and volunteers for Franklin Elementary School PTA and Mormon Women for Ethical Government.

Eric Chase, running for House District 61, came to Utah for college and after earning a degree in Mechatronics Technologies, made Provo his home.  Eric has helped organize service projects, promote local non-profit groups, and represented his neighbors to city and state officials.