Addressing the Problem of Mass-shooting 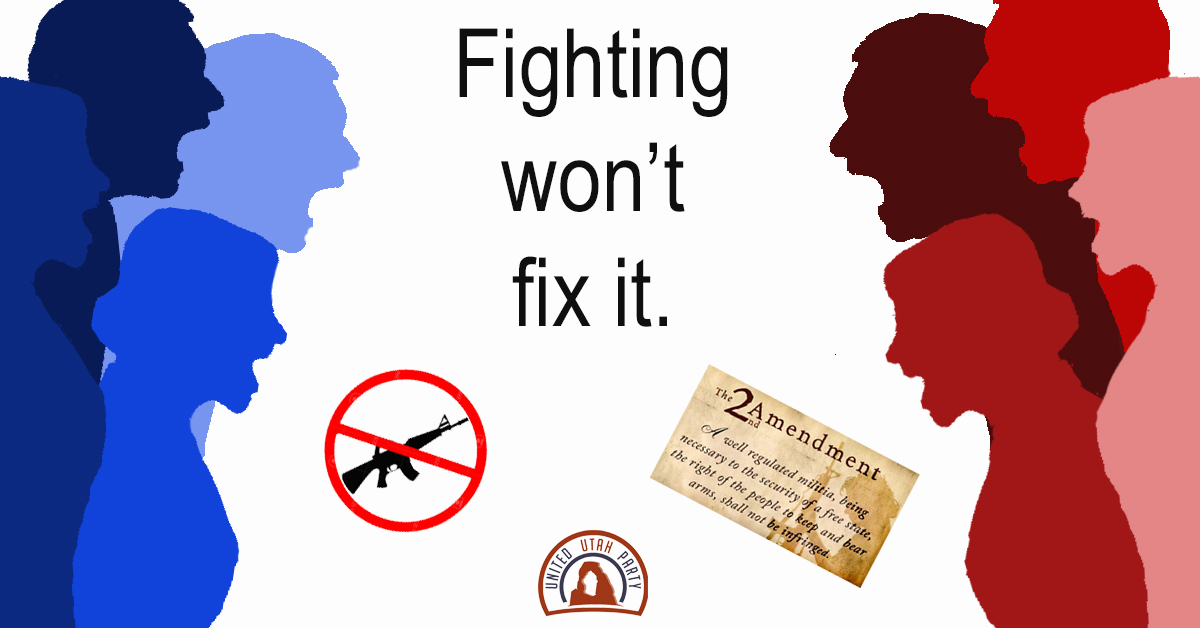 When the school shooting at Columbine hit the news more than 20 years ago, Americans were stunned. Since then, the number of mass shootings in public places is making Americans look deeper and more personally into possible solutions for this growing problem.

Posted by United Utah Party · August 20, 2019 10:45 PM
Beginning September 7, 2019, the United Utah Party will be holding county party conventions across Utah. The purpose of these conventions is to elect county officers, help party supporters get to know each other, and work together to build the party in the county.
"We invite to our county conventions anyone interested in a new alternative to the dysfunctional Republicans and Democrats.  Come join us in building a new political system build on moderation, common sense, and practicality," said Richard Davis, the UUP Chair. "You will find other like-minded people who want to end the partisan gridlock that dominates today's politics."
UUP county conventions are open to the public. However, only those who are registered members of the party can vote on party business at the convention. For those not already UUP members, voter registration can be done in advance at vote.utah.gov or at the door.
Add your reaction Share

Posted by Hillary Stirling · July 22, 2019 11:53 AM
UNITED UTAH PARTY BACKS TERM LIMITS INITIATIVE
Launches new website at unite4termlimits.org
The United Utah Party announced today in a Live Facebook event on its Facebook page held at 9:30 am that it is submitting an application for a ballot initiative that would place term limits on state elected officials in Utah.
Under the proposed initiative, state legislators would be subject to a 12-year limit that would allow state senators to serve three consecutive terms, while House members would be limited to six consecutive terms. However lawmakers would not be banned from running again after a “time-out” period.  The initiative also would exempt all elected officials currently serving on those positions.

Statewide officials - governor, lieutenant governor, attorney general, state treasurer, and state auditor - would be limited to two four-year terms. Federal officeholders would not be affected.
“The goal is to restore the ideal of citizen service and discourage career politicians,” said Richard Davis, United Utah Party Chair.  “What we are proposing is a reasonable term limit that still allows elected officials to serve long enough to make a difference, but not so long their career becomes more important than their constituents.”
Fifteen other states have term limits on their legislators, including Arizona, California, Montana, and Nevada, and twenty-eight other states have term limits on the governor, including Wyoming, Montana, Arizona, and Nevada.
“We prefer the legislative process, but we know that legislators will not seriously limit their own terms," Davis said. “The last time they did so, they repealed it before it affected anyone."
In 1994, in response to a citizen initiative, the Utah legislature limited its terms to 12 years.  However, in the last two hours of the 2003 legislative session, with no debate, the legislature repealed its own term limit.  Governor Mike Leavitt signed the repeal.
"We believe an initiative will make it harder for the legislature to play games with the voters since it will be the voters who impose the term limit system,"  Davis explained.

The UUP has launched a website - unite4termlimits.org - that outlines several reasons for the initiative, including eliminating a sense of entitlement to an office, rotating office holders to bring in new and fresh ideas, and decreasing incumbency advantage in elections. The website also will offer information about upcoming public hearings and allow supporters to donate time and money to the cause.
“If it gets on the ballot, we are confident it will pass,” Davis said. “Surveys show that the voters want term limits.  We will need the help of many Utahns to get this on the ballot.”

More information is available at unite4termlimits.org.
Add your reaction Share

Posted by Jim Bennett · June 20, 2019 5:16 PM
A STATEMENT FROM THE UNITED UTAH PARTY RE:
SEN. DAN McCAY’S PROPOSED ABORTION LEGISLATION
The United Utah Party has issued the following statement:
Sen. Dan McCay has announced that he is drafting legislation on abortion that would be similar to controversial laws passed in Alabama and other states. He has stated that he is “unsure” whether his legislation will include exceptions for rape, incest, or even to save the life of the mother.
This should be troubling to everyone in Utah, regardless of party.
Like most Utahns, The United Utah Party opposes elective abortion in most circumstances, but we believe there must be the availability of exceptions for instances such as cases of rape or incest or when a mother’s life or health is in serious jeopardy. This is a part of our party platform, which is available at unitedutah.org.
The recent spate of laws across the country do not allow for those exceptions, and Sen. McCay’s divisive rhetoric suggests that he is more interested in crafting a similar law that would pander to partisan extremes instead of representing the will of the majority of Utah voters.
That’s unacceptable. We can do better.
We call on Senator McCay and the Utah Legislature to reject extremism and to find solutions that prioritize the health and welfare of both women and their children.   If legislators intend to pass legislation regarding abortion to challenge the Roe v. Wade decision, we urge them to include the exceptions we note.  Also, we believe that abortion facilities, particularly hospitals, should be available to women who meet these exceptions.  In addition, we urge the legislature to support legislation that makes alternative birth control options besides abortion more available to women, such as codifying the Utah Department of Health policy that allows women to gain access to birth control without a prescription.
For more information, visit unitedutah.org.
Add your reaction Share

Utah Republicans elected new leaders for their party last Saturday. I welcome the new leadership. Service to the community is to be applauded. Also, I have known Derek Brown for several years and respect his commitment to public service.

The new leadership is being portrayed by media reports as "reasonable" Republicans. I hope so. As reasonable Republicans, I urge them to do the following: